Working on my home lab today, I discovered that once you have imported a VM from vSphere and created the vApp there wasn’t an option to then import another VM into the same vApp. This really frustrated me as I wanted to import 4 VM’s into the same vApp in the cloud.

The easy way I found to do this is as follows: 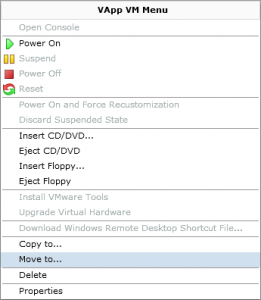 That’s it, and now you have the second VM imported into the vApp. I really think we need an option within a vApp to import more than one VM, and will mention this next time there is a request for features.